Have you ever been stalked by a thought, or an image, or a half formed plan?

Have you ever been stalked by a thought, or an image, or a half formed plan? Some months ago I saw a block of a yacht and had a half-cocked idea for a quilt but the block itself didn’t really do it for me, it had no sense of movement and wasn’t very yacht-like, so the idea didn’t progress further than that initial “hmmmm” moment. 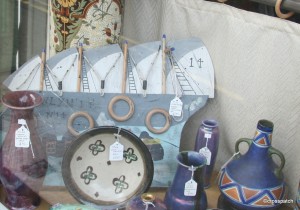 However since then I have been stalked by images of yacht’s, not just the real thing at sea or on lakes but wherever I go, in stained glass, in shop windows, in magazines or on fabric, toy pond yachts on window sills in houses I pass (not one but several in a single week), postcards, even in a bag of Haribo sweets, and a shower curtain.

Am I being stalked or are Yacht’s simply ‘on trend’ at the moment, either way I think I need to work out my thoughts in fabric. What is a Yacht without billowing sails, a floating gin palace; a glorified floating caravan? My Yachts must have wind in their sails, and movement in the block, I don’t want the quilt to represent a flat calm, but I’d rather have a brisk breezy day than stormy weather.