The plan was to drive up to Sandside and stop by the roadside with a view of the Kent Estuary, and the snowy fells beyond to eat our picnic, but it was not to be.

A sunny day to round off my rainy hiatus between jobs, so we took the opportunity afforded by my little convertible not being mothballed for the winter quite yet and went out in it with the top down (and plenty of warm layers on) I’ve known it to be warm and balmy into November but this November isn’t one of those, in fact there’s snow on the Lakeland hills already.

We drove to Silverdale and then on to Arnside where we stopped to buy a picnic in a local bakery, the plan was to drive up to Sandside and stop by the roadside with a view of the Kent Estuary, and the snowy fells beyond to eat our picnic, but it was not to be, before we got there we met with a couple of women standing in the road flagging down the traffic and turning us back, there had been a road accident ahead, and they were trying to keep the road clear for the ambulance. I have to admit my first thoughts were hardly charitable.

We ate our picnic in a less salubrious spot, and a very disappointing picnic it was too, maybe I should pack one myself next time.

I received a text from my sister, “Things can only get better?” my Niece’s car was dead on the drive, possibly a dead battery, that’s not fair reward for her kindness now is it?

While writing the last long blog and thinking things couldn’t get any worse, they did!
On the morning of the 2nd Nov I received a text from my sister, “Things can only get better?” my Niece’s car was dead on the drive, possibly a dead battery, that’s not fair reward for her kindness now is it?

Meanwhile I have been struggling to get on line at all, I made the mistake of allowing a teenager access to my laptop, consequently it is now so full of malware and pop-ups that it won’t run, not even Facebook, I’m bereft of contact with the outside world. Another disaster, well perhaps that’s overstating the case somewhat.

Surrounded by family is the best way to find yourself broken down, at least we weren’t stranded. We called the garage and waited to be rescued, it wasn’t a long wait but it was a cold one, none of us had dressed for a country walk or a stranding in the dark.

Back round to Dad’s before murder was committed, called garage, car ready, called sister, sister and niece arrive and we all set off in good humour to the garage. We collected the car, and paid up for both bills, just over £500 for the two and said good bye to my sister and niece, whom we left at the garage, discussing her repair dilemmas.

Steve and I were congratulating ourselves on getting away so lightly, with a 16 year old car so much could go wrong, and be expensive to repair, and how we hoped to keep the old girl on the road for another year, or two. Disaster struck again, as we drove along the darkening country roads, the engine began to lose power and the temperature gauge was pointing at red, situation critical. We stopped, we got out, we rang my sister hoping she was still at the garage, but as she picked up her phone she also pulled in to take the call only yards behind us on the same stretch of country road, and my niece who had been driving ahead of her mother, pulled in just in front of our stricken vehicle. 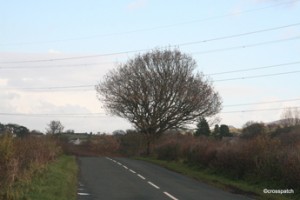 Surrounded by family is the best way to find yourself broken down, at least we weren’t stranded. We called the garage and waited to be rescued, it wasn’t a long wait but it was a cold one, none of us had dressed for a country walk or a stranding in the dark. While we waited, the road became quite busy, people going home from work and taking the scenic route, many passed, only one stopped to ask if we needed help, but that was very kind. 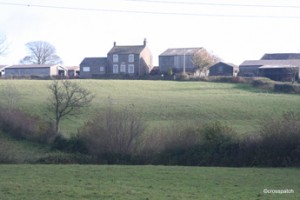 Then a young lad appeared as if from nowhere to ask if we were alright, He’d come from a farm on the hill above the road, seen the lights of the three cars and come down on his quad bike to offer help, running out of fuel at the bottom of the hill he’d needed a lift back himself.
It was pitch dark when the mechanic arrived, lifted the bonnet, diagnosed a faulty water pump, he suggested we return the car to the garage and they’d look at it tomorrow. As we got back into my sister’s car, it began to hail again, and there’s still no heater in her car because the part hasn’t arrived. I will simply have to tax my car and run it till the BMW is fixed. Thank goodness I’m not so super efficient that I had already cancelled my insurance and declared the car off road.
We could sit here declaring what bad luck we have had, and wondering why us or we could look at it another way, thank goodness the water pump hadn’t gone when we were up in the Lakes last week, the tow truck would have cost hundreds. It could have conked out next week on my way to an interview I have planned, now that really would have been a disaster.

My sister and I are both in our 50’s but always obedient girls; we did as we were bidden.

On 30th of October the BMW was taken to the garage, we were admittedly cutting it fine, if it didn’t pass, we’d have no car, so no surprises, it didn’t pass. Not much needed doing but it meant we couldn’t pick it up on 31st. Today the 1st November I was going to risk driving my car without tax, only a short trip on country roads, surely I’d be unlucky to get caught. My Dad got wind of it and rang my sister, she couldn’t give us a lift up to the garage either because, co-incidentally her car was at the garage too, waiting for a part to arrive so her heater could be fixed. Dad insisted that my niece would need to take us all up to collect our cars and my Mazda was to be delivered to his garage to be mothballed as planned. My sister and I are both in our 50’s but always obedient girls; we did as we were bidden.

So today we have been a no car family, what a disaster, I had taken a few days off work in the hiatus between jobs, and had hoped to have some rest and peace, unfortunately my neighbour is having her kitchen refitted so BANG, BANG, BANG, DRILL, BANG, DRILL on the party wall for several days till my beloved and I were ready to do murder. This morning I took my car to Dad’s, tucked it up for the winter and walked home.

We went to the pub for lunch just to get out and again about three O’clock to trawl the local charity shops, but really to get away from the constant banging and drilling, we got caught in a brief Hail storm, twice. I bought a book and couple of men’s ties, (of which more another time), and we got chilled to the bone. When we got back the builder’s van had gone so we risked brewing some tea, in the hope of an hour’s respite, but it was not to be, before the tea was drunk the builder had returned, more bang, drill, bang, ARRRGH!