a visit from two lovely young female paramedics carrying a bottle of Entanox, and a stretcher,

Yesterday I planned to go to The Scarecrow Festival at Wray, an annual event with a fair which takes place in a little village in the Lune Valley a few miles North of us. The sun was forecast to shine late afternoon so on our way there we stopped by to see my Mum and Dad.

Dad had a hip replacement 20 years ago and sometimes it pops out, he generally manages to pop it back in but not this time… so his afternoon included a painful and worrying time while we considered what to do, a 999 call, a visit from two lovely young female paramedics carrying a bottle of Entanox and a stretcher, a ride in an ambulance, a lengthy wait in A&E, an X-ray, a general anaesthetic, his hip relocated where it should be and a weekend break he hadn’t planned in the local hospital. My poor old Dad.

My Beloved and I then went for a walk in the sunshine, but only in the local park, Williamson Park; built and given to the citizens of Lancaster by a local Philanthropic Mill owner, it was laid out in the 1860’s to make work for the mill workers laid off due to the cotton famine during the American Civil War, an early form of poor relief.


It stands high above the city and can be seen for miles, particularly the Williamson Memorial; a folly built by James Williamson, son of the philanthropist, in memory of his second wife Jessie, I believe the third wife spent her entire married life trying to get him to tear it down. Thank goodness she didn’t succeed.

I once overheard a woman telling her friend about a factory shop that sold Laura Ashley roll ends and seconds, I wasn’t brave enough to stop her and ask the whereabouts of this shop, and the regret haunts me to this day!

It’s been an eventful week, I celebrated my birthday on Monday, I only admit to 43, and it’s getting harder to be convincing, but I take the view the years between 40 and 60 are the best 10 years of a woman’s life. I celebrated by starting a new job, part time and temporary but slightly better paid, so I’ll be able to buy more fabric. Yay!
I took the afternoon off to take the 16 year old to Kendal for a college interview, 2hrs in a stuffy hall while she took her interview and tests, but she got an offer of a place. And Kendal’s only 20 miles away. Yay!
Got to do some interesting and useful things at work this week, all very positive, and came home on time and feeling good about my day.
Wednesday was 1st of May, I got the convertible out of Dad’s garage and taxed it, my precious is back on the road, Thursday morning I drove to work with the top down and the wind in my hair, here comes summer. 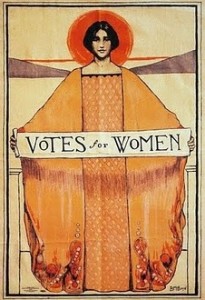 Thursday lunchtime I got to exercise my Civic duty, to vote in the local election, I could get a postal vote but actually I enjoy the process of turning up at my local polling station, getting my ballot paper and putting my X in the box. Not only am I grateful to live in a democracy, but I never forget the Suffragettes who risked all to achieve Universal Suffrage. To me, not bothering to vote would be a betrayal of all they suffered. Being an Unrepentant Feminist and for many years a single professional woman, I value very highly the contribution they made to the Equality of Rights in society. Thank the Lord I live in the 21st century. 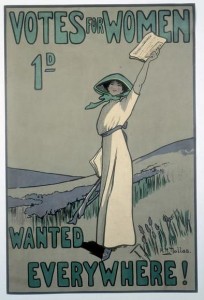 On the walk back from the polling station, I visited my local charity shop and bought a man’s shirt to add to my collection of 100% cotton plaids, that I am collecting for a project of which more later. It cost me £1.50 and is in perfect condition, doesn’t look as if it has ever been worn, I already have several, none of which cost me more than £1.50, for some I only paid a £1.
The previous week I was standing in my local supermarket considering the price of cheese when I became aware of a couple to my right chatting to a friend, who was talking about a charity shop where he volunteered, he was telling them that they moved all the stock which hadn’t sold into an upstairs room and sold it off at £1 a garment. Now I’m not in the habit of earwigging at stranger’s conversations in the supermarket, but I admit to hanging about long enough to discover the whereabouts of this charity shop, and I admit also that had this information not being forthcoming I would have had the brass neck to interrupt him to ask. I visited that Charity shop forthwith, 3 shirts a £1 each.

I once overheard a woman telling her friend about a factory shop that sold Laura Ashley roll ends and seconds, I wasn’t brave enough to stop her and ask the whereabouts of this shop, and the regret haunts me to this day!