These two quilts are another mother and daughter effort, the first is mine using my favourite bright colours, with black. The second is my mother’s, rich colours which tone beautifully together. 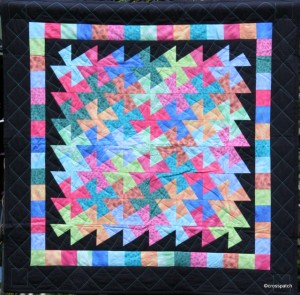 The block is known as Twister, it looks rather complicated, and whilst it does take some planning and a large workspace is helpful it is actually fairly simple to achieve.
First task is to cut out squares and put them together in a grid bearing in mind that each square will tessellate with its neighbouring squares in the finished article, so each square should be sufficiently different from its neighbour to give the definition you want. 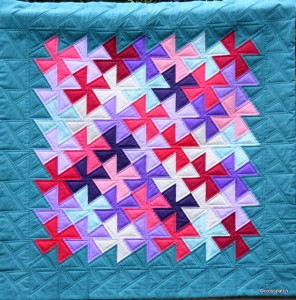 Once you have a grid maybe 20 percent larger than the finished article you plan, you take your scissors to it cutting it up using a template guide. At first it may seem that there is a profligate waste of fabric as you do cut to waste. A large bias square is cut from the centre of each square, I set these aside to use in the border. As each new square is cut diagonally from the fabric with the intersection of the squares as the centre of the new squares you cut, you should then rotate the square 90 degrees and set it back next to its neighbour. You will find they begin to tessellate; now you see why you need to have a large workspace, because you need to set out the entire quilt top, each piece placed by its neighbour, to get the placing correct.

You will have a collection of little bias cut squares left over, now it’s never a good idea to use bias cut fabric , bias cut edge to bias cut edge if you can avoid it,because both edges will stretch. If you cut the same size squares on straight grain, and join them alternately bias cut edge to straight grain edge, you can produce a string of coloured squares to use as a border, it will still stretch a little if you are not careful, but at least there will be no waste. I cannot bear waste.

The first quilt I made in this pattern I can’t find a photo of, probably because it was photographed long before I discovered digital photography, in fact it may have been made before digital photography existed.( Do you know how old that makes me feel?) It was a cot quilt made for a friend at the birth of her daughter, and was in pretty pinks and blues and on a very small scale, hand quilted in circles.

With a heavy heart I reached for the secret yellow stash, cut a couple of apple cores and threw them into the mix… presto! The whole thing started to come together.

Going back to the Sizzix Big shot, I have now solved my little dilemma, and indeed the dreaded yellow was the answer. I had spent a few nights trying to think how I might avoid using the dreaded yellow and came up with an idea that a lime or apple green might work but on looking again at what was already cut I found I had already introduced a pale apple green, so that would not work. With a heavy heart I reached for the secret yellow stash, cut a couple of apple cores and threw them into the mix… presto! The whole thing started to come together. 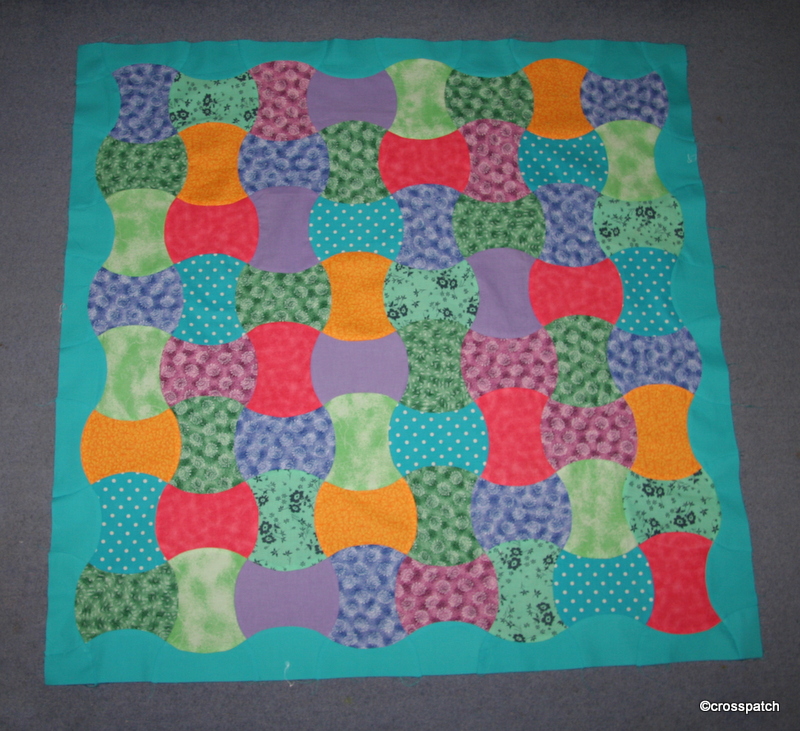 Then I went to my stash for a royal blue for the border but again…. it just wasn’t working, so off to the fabric shop I went,…..lavender blue? no, Airforce blue? no, Navy blue? no…..what about turquoise? Turquoise it is! I may even bind it in yellow too, but I’ve got time to ponder that while I do the quilting.
So next dilemma… how to quilt, and what to back it with?