the sun was shining in a clear blue sky, my spirits lifted, the gardens were a little piece of Paradise, so it’s true what they say the sun really does shine on the righteous

Last week the 13 year old went off to France on a school trip, whilst his father fretted and worried about him I was happy that he was off on a Big Adventure, and saw it as a great opportunity for a few day’s leave, so that we could go out early and stay out late because we had no-one to come home to feed or make sure homework was being done or bed time adhered to. If only the weather had been kind! It rained and rained… and rained. I found myself humming the Travis tune “why does it always rain on me, was it because I lied when I was 17?”

By the third day I was determined to enjoy my day whatever the weather. We had planned to visit a National Trust property near Manchester but couldn’t face a wet, grey journey down the M6, so we headed east towards promised drier weather. We drove to Skipton for lunch then on to Bolton Abbey and Wharfedale in the Yorkshire Dales National Park, to visit a famous garden attached to Parcevall Hall; which comprise 24 acres of formal and woodland gardens which rise up the hillside for 200 feet giving wonderful views in every direction.

The house itself is not open to garden visitors, sadly; it must be fascinating, dating back to 1584 at least and extended in the 1920’s. It belongs to the College of Guardians of the Shrine of Our Lady of Walsingham and is used by the Bradford Diocese as a retreat house and conference centre. Hardly surprising then, that as we arrived in the neighbourhood of Parcevall Hall, the sun was shining in a clear blue sky, my spirits lifted, the gardens were a little piece of Paradise, so it’s true what they say the sun really does shine on the righteous. 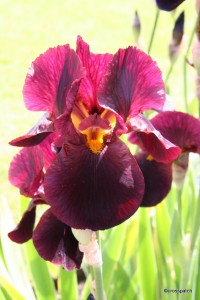 The last three miles as we drove towards the Hall were nerve racking, the roads narrow and winding, we both held our breath in fear of meeting another vehicle coming the other way; mostly we only passed walkers and cyclists.

We had tea before exploring the gardens; a little sparrow came and begged for food, even standing on our table inches from my hand. On the garden wall I spotted a baby sparrow just fledged and not quite in control of itself. There were beautifully planted terraces nearer to the house, an orchard of rare old apples trees, a lake and a babbling brook, woodland walks and a walled garden. Against a wall in a sheltered spot there was a crinodendron I’ve only seen it once before.

Later I spotted a wren, I stood for many minutes camera to face so as not to frighten it, hoping to get a picture but sadly she was too fast for me, I only got one blurry shot, I used to have a little wren in my garden, they are so tiny, so pretty, I love wrens.

As we left it seemed that the roads had become even narrower, so much so that if we met a vehicle coming in the other direction both drivers and passengers needed to breathe in, in order to pass safely. It’s strange what you see in the hedgerows, once when we pulled over to allow another driver to pass I spotted both currants and gooseberries growing wild, I didn’t look too closely under the gooseberry bush, never know what you might find!