In autumn, the trees are laden with purple fruits and roadside stalls appear advertising damsons for sale.

The last week in September I saw damsons for sale in my local Supermarket but at extortionate price, £4.99 a kilo, I ask you? As with my previous hedgerow makes it’s not the right thing simply to buy my ingredients in the sterile environment of a supermarket, I want to know where they were picked, to pick my own if I can. I wanted to make some damson gin for Christmas and perhaps some damson wine too, so I persuaded my Dearest that we needed to take a road trip up to the Lyth Valley over the County boundary in Cumbria.


The Lyth Valley has made the Lonely Planet beautiful world list. The Lonely Planet has published a new book to showcase beauty from across the globe,they describe the valley thus: “The unspoilt Lyth Valley is tucked in a hidden corner of Cumbria, where trees are laden with fruit and rolling hills are the most magnificent green.”

This hidden corner of Cumbria is famed for its damsons. In autumn, the trees are laden with purple fruits and roadside stalls appear advertising damsons for sale. That’s where we were headed; a stall we often pass and which I am always happy to see still trading. Up close it’s just a shack, but the produce on sale is good fresh locally grown goods.

We got the last of her damsons ripe to the point of no return. She advised me to use them up immediately, so I did, a brew of wine and a jar of damsons steeping in gin were put to bed that very evening. It may have cost me more to drive up to the Lyth Valley to buy my damsons but a glorious sunny autumn afternoon in the Lyth Valley is priceless.

Damsons were originally imported from Damascus for their dye, and given the name ‘damascene’ – later shortened to damson. ( Prunus domestica subsp. insititia, or sometimes Prunus insititia), also archaically called the “damascene”) some say it was introduced by the Crusaders but others claim the Romans brought them, and there were damson stones found in archaeological digs of Roman York.

The proprietor, had a wonderful elderberry tree hanging heavily in fruit, she told me many people had asked her what she planned to do with the fruit to which her reply was “absolutely nothing” she said I could help myself… if only I’d known a couple of weeks earlier.

an impossible task, she needed a new bag for College and she knew exactly what she wanted, the problem was it needed to be waterproof and it wasn’t.

The 17 year old set me an impossible task, she needed a new bag for College and she knew exactly what she wanted, the problem was it needed to be waterproof and it wasn’t. Knowing how important it is for her to have things which look right, which have credibility, I undertook to “try” to make it waterproof.

First step was to buy some proofing spray in the hope that we could give it a waterproof coating. My Dearest innocently believed he could simply buy the most expensive waterproofing spray from one of those outdoor activity shops, and spray it on, and Presto! It would cast water like a duck’s back. Ha! Great idea… two applications later no sign of it casting water.

I’ve always been a greater doubter than him so I already had plan B in my mind. If I could not make the outside waterproof then I needed to create a waterproof barrier between the outer layer and the contents of the bag.
We visited a number of shops to find a fabric with waterproof properties but found none. The internet is so wonderful, found what we wanted, ordered and arrived in a week and cost less than the diesel would have cost to seek what we wanted out of town.

I even made a little waterproof pocket for the back pocket which might otherwise soak up water from the outer and would have been the wrong side of the waterproof lining.It is almost exactly as it was before, I defy anyone to see any difference. 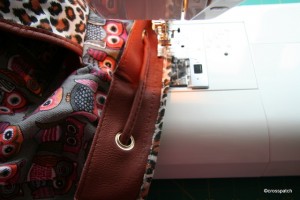 I just hope it works, because poor girl has a long a weary commute each day on bus and foot, if we have a wet winter she will have a very soggy wet rucksack and damp contents, her art work will not be improved by water. Let’s all pray for clement weather, cold but DRY.