Nearly two years ago, and before being thrown out of my studio to make room for a sixteen year old, I made a crazy patchwork cushion for a group challenge.

Nearly two years ago, and before being thrown out of my studio to make room for a sixteen year old, I made a crazy patchwork cushion for a group challenge from 1980’s scraps some of which were Laura Ashley fabrics.

I wasn’t happy with the way it was finished but as with many of my projects I ran out of time and completed it in a rush in order to submit it to my quilt group’s annual challenge.

So the plan was to deconstruct it, well take the back off. I’d stitched it with a long stitch to make that easy. Put a zip in the back, instead of the envelope back that I’d had to do as a quick temporary fix. 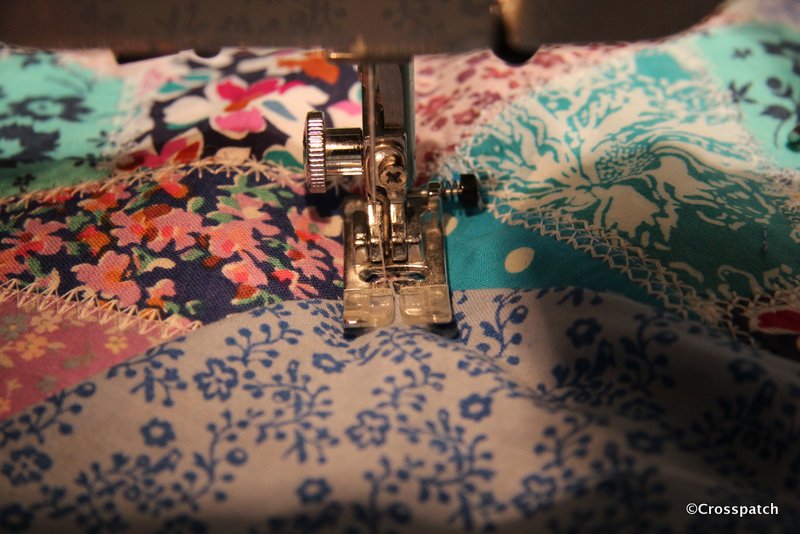 Then I needed finish the white embroidery on the front, so that all the edges were finished in the same way.
Finally I top stitched round the edge, I do this a lot on cushions just to give definition to the edge and to make them fit the cushion pad better. I do like a plump cushion.

My cushion was made particularly to go to work with me to pretty up my office, but just as it was being made we were told we would soon be moving to a new “agile “ working environment where there would be 3 desks to 5 staff . The “personalisation of work spaces” would be frowned upon, or rather strictly forbidden. So my Crazy patchwork cushion will remain at home, and pretty up my new studio, on my Windsor chair with a view of the back garden.

The crazy patchwork cushion will also be submitted to my group’s biennial exhibition later this month, so that’s two items… see my next blog post for the third item.