Imagine it in red and white, a striking alternative to the traditional double Irish chain. Perhaps it would work in black and red if you have a Goth in the household, or black and neon Brights if you want a stunner.

This is something I have been tinkering about with for months; I’m making a scrap quilt from all my Liberty lawns. I have many small pieces sometimes a quarter or half yard many with print errors which need to be carefully cut around, so scrappy quilts lend themselves to such a collection. All my Liberty prints are roll ends and misprints from the factory shop, but for a project like this they are perfect.

This block makes a wonderful scrap quilt but can just as easily be adapted to use only two fabrics or a carefully chosen mix of your favourite palette, the only stipulation I would make is that you need lights and darks to ensure clear definition, if you choose fabrics which are too close in shade or tone you will lose the pattern.

It would work with pastels on white or ivory, for a baby quilt; or two plains for the team colours of any keen supporter, claret and blue for a West Ham supporter perhaps. Imagine it in red and white, a striking alternative to the traditional double Irish chain. Perhaps it would work in black and red if you have a Goth in the household, or black and neon Brights if you want a stunner.

I’ll explain how it’s made and give the dimensions when it is finished, but there is a long way to go yet; now that the nights are drawing in and the days getting colder and wetter my garden needs to be “put to bed “, and then the quilting can begin. 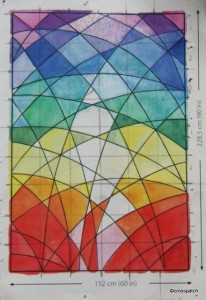 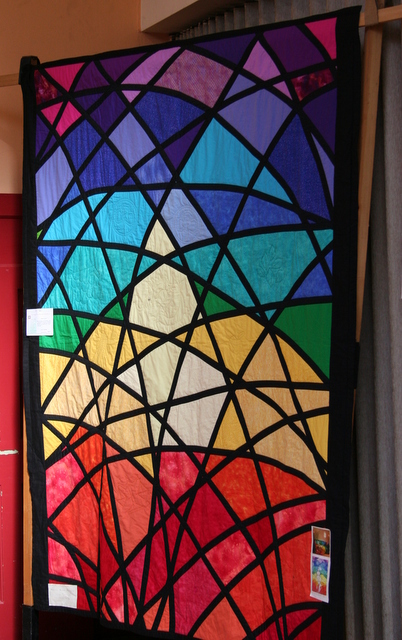 I took the pattern and volunteered to give it a trial run, to see if it would work as a group quilt

My quilt group have an exhibition biennially; we use it as an opportunity to raise money for charity and like to choose a small local charity rather than a large national charity. We don’t raise much but a little often goes a long way for a small charity, and makes a real and tangible difference. We always create a group quilt to raffle and to publicise the forthcoming exhibition. 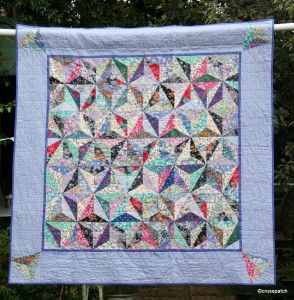 This design was presented as a possible group project to create a quilt to raffle, as a member of the committee at the time I took the pattern and volunteered to give it a trial run, to see if it would work as a group quilt. There is one simple piece to cut, and to achieve an optical illusion similar to the tumbling blocks design, it’s necessary to chose fabrics in light, dark and medium tones, one of each tone is then sewn together to produce a triangle; placing the light, dark and medium in the same position in each block to give the effect of a pyramid viewed from above.It’s important always to have the three tones in the same position because the 3D effect of the pyramids only works if the light appears to be coming from the same angle across the whole surface of the quilt. 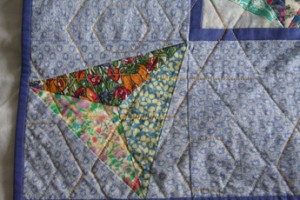 Although the triangles are put together in rows one pattern which also emerges is the hexagon; it was the hexagon I used as inspiration for my quilting design, as can be seen where it extends into the border.The design never made it as a group quilt, there were just too many possible variables, group quilts work best when the variables are kept to a minimum, this pattern required hand drawing of pieces round templates, cutting with scissors not rotary cutting, there would be fabric placement variables, seam allowance variables….. etc… etc. No there were just too many possible ways in which blocks made by many individuals would fail to go together neatly to produce a quality finished article. 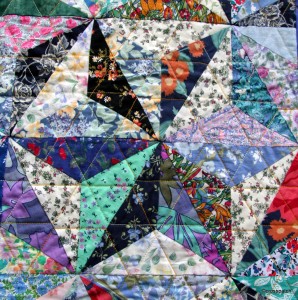 Nevertheless I liked the finished article, so much so I began to make another quilt, from the same design but with a limited palette of just three fabrics, but somehow, somewhere I lost the template, and the impetus to finish, so for years I had a number of cut pieces and a bag of bits, but no template. The original pattern came from an Australian Quilt magazine, which didn’t belong to me, and I’m not sure who owns it. I have subsequently found another template for the same design in a quilting book I bought in (of all places) ALDI. Maybe I’ll get round to finishing that quilt, or maybe not, the thing is … the moment has passed. 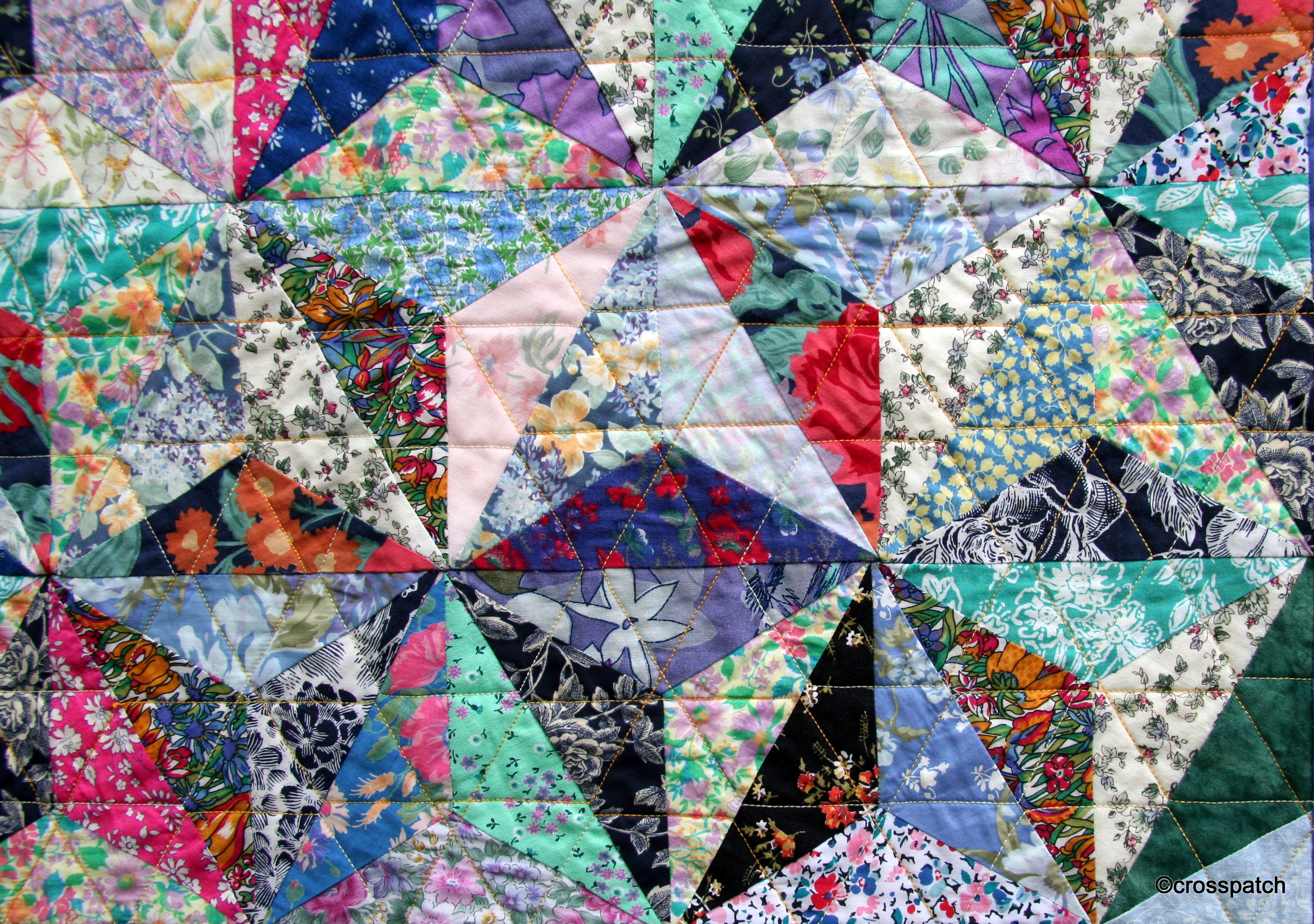